In an interview with ProMarket, Angela Huyue Zhang, author of a new book Chinese Antitrust Exceptionalism, discusses the motivations behind the recent...
Read more
Corporate Governance

In the US, there are more than 100 hospital mergers every year. This increasing concentration does not lead to the promised savings, nor to better services, but politicians are not interested in tackling such big employers.

Springfield Hospital in Vermont filed for bankruptcy in June and is now trying to restructure a $20 million debt. Michael Hasted, the interim CEO, said that the hospital’s survival would be “virtually impossible” without a merger with other hospitals in the region. It is one of the many mergers that are making the hospital industry increasingly concentrated. Grey’s Anatomy, the popular medical TV show, even staged a merger between the Seattle Grace Hospital and the Mercy West Medical Center.

A few weeks ago, the American Hospital Association released a report to show that concentration is good for both the hospitals and the patients: annual operating expenses at acquired hospitals decrease by 2.3 percent, rates of readmission and mortality fall, and the savings produced by the merger pass through to customers, as suggested by the 3.5 percent decrease in revenues per admission. Sadly, independent studies have reached completely different results: With more hospital concentration, prices rise and quality decreases.

The hospital sector is the largest contributor to health spending in the US: it accounts for 33 percent of total health spending, 1.143 billion dollars per year, or 6 percent of GDP. Hospital mergers are growing fast at a rate of more than 100 per year. To date, antitrust authorities have cast very few objections, but this doesn’t mean that mergers have no consequences. “Not every merger is bad and every merger should be assessed on a case by case basis, but that sort of consolidation is raising prices and driving up health care costs,” said Zack Cooper, Associate Professor of Public Health and Economics at Yale University, in a recent presentation. 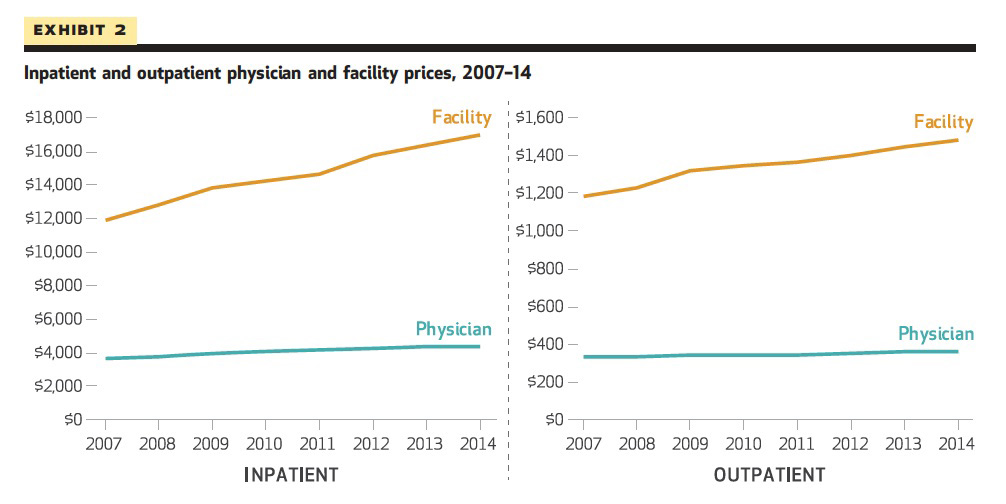 Cooper and his colleagues in the Health Care Pricing Projects use insurance claims data from Aetna, Humana, and UnitedHealth to examine the variation and growth in health care spending on the privately insured. Their results show that, on average, inpatient and outpatient prices are pretty stable for physicians, but they’re increasing for facilities during the years of the current merger wave. ProMarket has already covered a previous version of Zack Cooper’s study.

Most of the growth in payments for inpatient and hospital-based outpatient care was driven by higher hospital prices, while physicians’ prices remained flat.

Furher evidence suggests that growth in providers’ prices is in turn reflected in higher prices paid for private insurance. The average premium for employer-sponsored family health coverage was $19,616 in 2018. So, why is the hospital concentration problem not at the top of the political agenda on health care? “Hospitals are huge, they are a very popular and large employer,” answers Leemore Dafny, Professor of Business Administration at the Harvard Business School.

Hospitals present mergers as an opportunity for economies of scale,  integrating redundant departments and reducing marginal costs, but also as well as a necessity to making larger capital investments and to raise quality, thanks to higher clinical standardization. They also claim to make grater savings possible, thanks to increased bargaining power with suppliers.

It is not so easy to estimate whether hospital mergers produce any real efficiency gains: Both the acquirer and the acquired organization are influenced by the operation. A number of economics papers apply “difference in difference” models to solve this issue: They compare hospitals that merged with similar hospitals that remained independent to measure the benefits of the merger.

A review of the literature shows that the estimated impacts range between zero (no-effect) and 7 percent in savings. Unfortunately, most of these studies are based on aggregated costs data, which have limitations: Hospitals often change their internal accounting procedures and it could be very challenging to separate fixed and marginal components of these costs.

Stuart Craig, Matthew Grennan, and Ashley Swanson (University of Pennsylvania–Wharton School) use a different kind of dataset based on a survey that collects granular data on orders by hospitals for different product categories. They look at prices for key inputs for over 100 merging hospitals between 2009 and 2015.

Not surprisingly, hospitals pay very different prices for the same item. If one picks two hospitals at random from the sample and merges them, assuming that the post-merger hospital pays the lower between the two prices previously paid, the expected savings are on average around 7 percent.

Using a “difference-in-difference” model, Craig, Grennan, and Swanson find that what happens in the real world is much different from what was expected: very small savings for the acquired hospital (1.9 percent) and no savings for the acquirer (-0.9 percent). The biggest savings are on hi-tech PPI (physician preferred items, not controlled by the hospital management). If the merger does not reduce the costs for the hospitals, why should it have a positive impact on the prices that patients pay?

Martin Gaynor, professor of Economics and Public Policy at Carnegie Mellon University, argues that mergers between hospitals that are close competitors eventually lead to substantial increases in prices (between 10 percent and 60 percent):

The excpected costs savings are 7 percent, but after the merger the acquired hospital spends only 1.9 percent less and the acquirer 0.9 percent more

Besides, there is no systematic evidence that quality improves after a merger between competitors. On the contrary, for Medicare patients in the US and the UK national healthcare systems, Gaynor’s study shows an appreciable increase in the mortality rate for heart attack victims post-consolidation: 3.37 percent for US patients.

Economists are increasingly aware of the downsides of hospital concentration, but there is not any serious political debate yet on how to regulate the sector to prevent negative consequences for patients and the federal budget. Antitrust enforcement has not stopped thirty years of mergers, and legal battles to break up hospital conglomerates would be expensive, time-consuming, and unpredictable.

Therefore,  in Competiton Policy for Health Care, Gaynor, Farzad Mostashari, and Paul B. Ginsburg suggest a different approach: to set up review panels to monitor market conditions, price levels, and the quality of the services, with the power to impose conditions on all the relevant parties.

Such a regulation would offer an alternative to challenge mergers in court and to reduce the costs and improve the quality of the services. However, to enforce these conditions might be problematic as it always happens when the government tries to limit the influence of big players with relevant political influence.